Ipsos polling exclusively for Global News revealed that 55 per cent of Canadians polled say the federal deficit is too large, even in the wake of COVID-19 spending.

More than half of Canadians now say they believe the federal deficit is too big.

And even a majority of Liberal supporters say they want to see a plan for getting back towards balanced budgets when they weigh their options before the next federal election — whenever it may be.

A poll done by Ipsos exclusively for Global News asked 1,000 Canadians over the 18 of age to weigh in on questions posed about the size of the federal deficit, new spending and the prospect of an election amidst the ongoing coronavirus pandemic.

But one area where Canadians appear to agree is on the need for a clear plan to rein in spending.

While 78 per cent say they want to see a plan to return to balanced budgets in order to consider voting for a party in any upcoming election, that number remained strong among undecided and even Liberal voters.

Among the undecided voters, 83 per cent said a plan for returning to balanced budgets is a prerequisite for their vote consideration. That number stands at 71 per cent among decided Liberal supporters.

And while 57 per cent of respondents said they are OK with giving Prime Minister Justin Trudeau a blank cheque to spend as much as he thinks is needed to combat the pandemic, that marks a drop of 12 per cent compared to those who said the same earlier in the year.

“Canadians are getting concerned about the size of the deficit not only in the immediate term but also as they start thinking forward to a potential new election,” said Darrell Bricker, CEO of Ipsos.

“It’s something that they want to have all the parties deal with. And quite frankly, you know, you can’t spend a generation or two generations talking to Canadians about deficits being a bad thing for them to all of a sudden turn it on their head and start to think that they’re a good thing.”

He suggested the tolerance for deficit spending has shown Canadians understand and support the need to spend during an emergency and on programs that will help people weather the immediate storm. But that support doesn’t necessarily extend to bigger spending not directly related to the crisis.

“All Canadians are looking at the current federal spending as really being about emergency relief,” he said. “There’s a lot of tolerance for that right now. But outside of that, we don’t really see a lot of enthusiasm for any other big spending.” 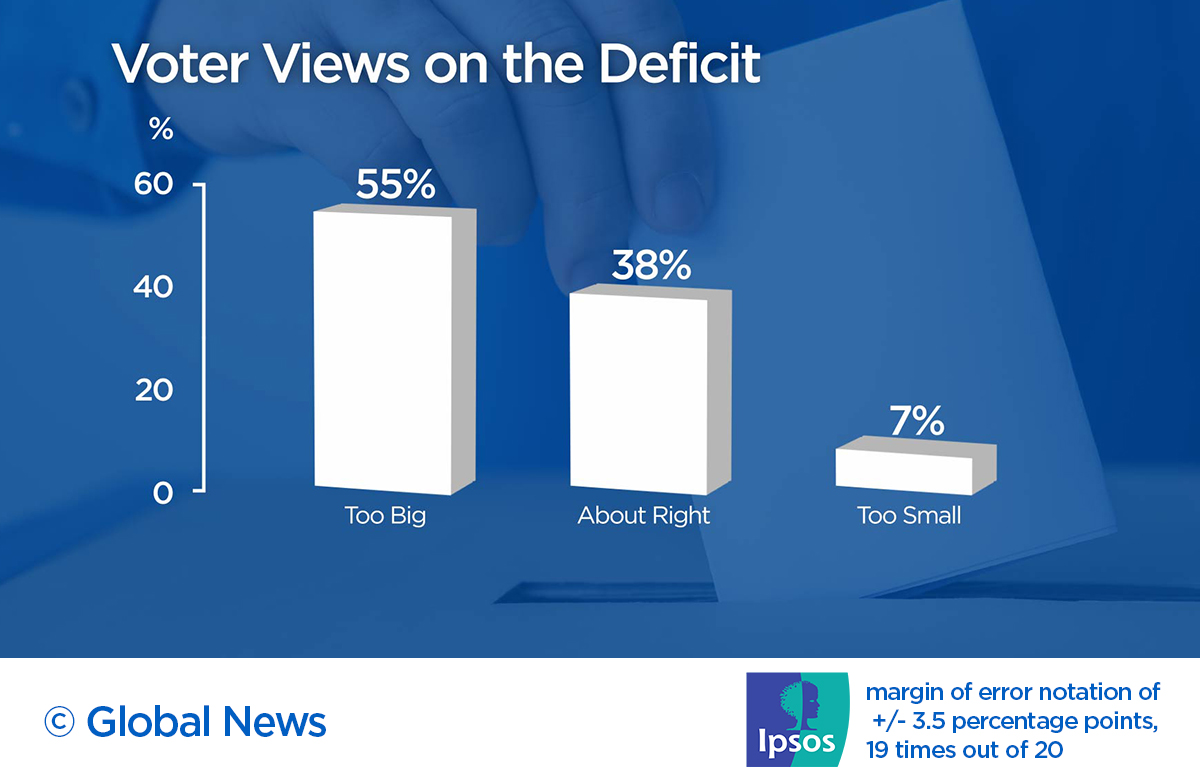 However, there appears to be little unanimity on whether Canadians actually want to be sent to the polls right now and the results here fall largely along party lines: 77 per cent of Conservative voters want an election this fall, compared to 59 per cent of Bloc Québécois voters and 53 per cent of NDP supporters.

Just 33 per cent of Liberal voters want an election this fall.

Read more:
Canada’s coronavirus deficit soaring to $343B as feds warn of ‘permanent change’ to economy

The Liberals are set to present a throne speech on Wednesday that will lay out their vision for the coronavirus recovery as the country shifts from emergency response to settling in for the long haul.

It remains unclear when or if a successful vaccine may be developed and in the meantime, cases continue to ebb and spike across the country even as the numbers grow around the world.

As a minority government, the Liberals will need the support of at least one other party in the confidence vote on their throne speech.

Trudeau has vowed it will include an “ambitious” green agenda, though just how much he plans to spend remains unclear at this time.

A fiscal snapshot presented in July projected a deficit of $343 billion this fiscal year.

Parliamentary budget officer Yves Giroux has warned that level of deficit is unsustainable if it continues for more than one or two years.

This Ipsos poll was conducted between Sept. 11 and 14, 2020, on behalf of Global News. For this survey, a sample of 1,000 Canadians aged 18+ was interviewed online. Quotas and weighting were employed to ensure that the sample’s composition reflects that of the Canadian population according to census parameters. The precision of Ipsos online polls is measured using a credibility interval. In this case, the poll is accurate to within ± 3.5 percentage points, 19 times out of 20, had all Canadians aged 18+ been polled.