With 11 days left until president-elect Joe Biden and vice president-elect Kamala Harris are sworn into office, the Democratic party is reportedly rushing to levy another round of impeachment articles against Donald Trump.

The calls for his removal from office come after violent protests in Washington saw the Capitol building breached and left five people dead.

Do the democrats have enough time to impeach Trump a second time? Could he be removed from office?

Here’s a look at what’s going on.

Is there enough time?

In a joint statement on Thursday, House Speaker Nancy Pelosi and Democratic Senate Minority Leader Chuck Schumer said they had placed a call to Vice President Mike Pence to urge him to invoke the 25th amendment and remove Trump from office for “his incitement of insurrection and the danger he still possesses.”

“The President’s dangerous and seditious acts necessitate his immediate removal from office,” the statement read.

Meanwhile, the Democrats are considering lightning-quick action. A draft of their Articles of Impeachment accuses Trump of abuse of power, saying he “wilfully made statements that encouraged — and foreseeably resulted in — imminent lawless action at the Capitol,” a person familiar with the details who was granted anonymity to discuss them told the Associated Press.

The articles are expected to be introduced on Monday, with a House vote as soon as Wednesday. 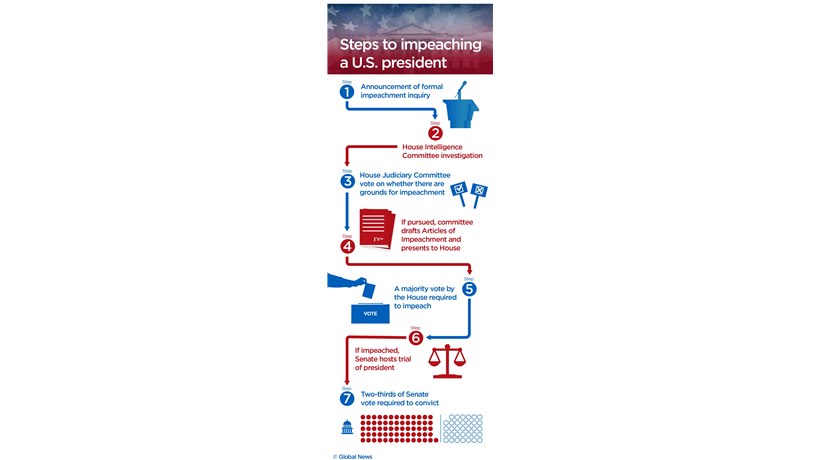 In a statement posted to Twitter, Democratic Congressman Adam Schiff, who spearheaded the impeachment hearings in 2019, said the House should “act to begin impeachment proceedings,” saying it is the “only instrument wholly within our power to remove a president who has so manifestly and repeatedly violated the Constitution.”

The House should act to begin impeachment proceedings.

It's the only instrument wholly within our power to remove a president who has so manifestly and repeatedly violated the Constitution.

Every effort must be made to protect the country from further harm. pic.twitter.com/ym4YpiXkDd

“The exigency of the circumstances warrants a departure from the ordinary and lengthy process in the House; a resolution of impeachment focused on the attack should be brought to the House floor on a privileged basis, and upon passage, taken up by the Senate with equal expedition so that the President can be tried, and through conviction, the country can be protected from further harm,” the statement said.

The Democrats maintained a majority in the House during the general election, meaning if articles are introduced, they are expected to pass in Congress’ lower chamber with ease.

However, as the articles likely won’t be introduced until mid-week, Matthew Lebo, chair of political science at Western University said “there’s really no way that Donald Trump would be removed by the Senate before Inauguration Day.”

Biden and Harris are scheduled to be sworn into office on Jan. 20.

“It is possible that the House could pass articles of impeachment, maybe as early as Wednesday or Thursday, but then the Senate probably wouldn’t pick those up and start proceedings until the 19th or the 20th,” Lebo said.

According to a Reuters report, Senate Republican Leader Mitch McConnell sent a memo to GOP senators outlining a possible timeline for an impeachment trial in Congress’ upper chamber.

He noted the Senate will hold its next work session on Jan. 19 and needs the consent of all 100 senators to convene sooner — meaning a trial would not begin until Trump was out of office, a source familiar with the document told the outlet.

But, while Trump likely won’t be removed from office before his tenure is up, Lebo said there are other consequences that Trump could face.
“One is some kind of censure, an agreement about what Donald Trump did that was wrong,” he said. “It would be a stronger mark for history to have, say half a dozen Senate Republicans agree with the House Democrats passing of articles of impeachment, even if removal is no longer possible.
Another possible outcome, Lebo said, is that the GOP could bar Trump from running for office again in 2024 as a Republican.

Lebo said some Republicans would “be very happy to knock out perhaps the leading contender for the 2024 Republican nomination.” Both senators Josh Hawley and Ted Cruz have signaled they are interested in running for president in the next general election.

Congress could also deny Trump the benefits given to ex-presidents including his pension, secret service protection or other perks given to those who served as commander-in-chief, Lebo said.

He said these are all things that could be completed after Jan. 20, and that once Trump is out of office “the floodgates will start.”

“And of these incidents of the last few days and incitement and perhaps some criminal or civil liability for people who were killed in the attack on the Capitol, I imagine people will be looking into that — the new Justice Department Congress — there will be hearings,” he said.

Trump could be 1st U.S. president to be impeached twice

If the Democrats are successful in their attempt, Trump would be the first U.S. president to be impeached twice.

In December 2019, Trump became only the third U.S. president to be impeached, joining Andrew Johnson and Bill Clinton.

A fourth president — Richard Nixon — resigned amid House impeachment hearings, but before a formal vote was ever held.
Trump was impeached by the U.S. House for abuse of power and obstruction of Congress, however, the the Republican-held Senate voted to acquit him in February 2020.

A lot of it is symbolic,” Lebo said. “But just because the guy is not going to be president doesn’t mean you can ignore the possibility that he’s committed high crimes and misdemeanors potentially treason.”

If the Senate does vote to remove Trump before Inauguration Day, Pence would step in as commander-in-chief until Biden and Harris are sworn in.

–With files from Reuters and The Associated Press