The Bolo Program has announced a top 25 list of “Canada’s most wanted” individuals, including several who are sought by the Toronto Police Service.

Bolo, which stands for “be on the lookout,” is a program that amplifies wanted notices.

Of the 25 individuals on the list, 12 are wanted by the Toronto Police Service, including Abilaziz Mohamed, who is listed as the most wanted person.

An “unprecedented” reward of up to $250,000 is being offered for information leading to Mohamed’s arrest.

He is wanted for first-degree murder in connection with the death of 43-year-old Craig MacDonald.

According to the Bolo Program website, emergency crews were called just after 11:30 p.m. on Oct. 13, 2021 to a Boston Pizza near Morningside and Milner avenues in Scarborough.

MacDonald had been shot in the parking lot after an altercation inside the restaurant, according to Bolo.

“He was a hard-working man who had five children, two stepchildren, and a granddaughter,” the website states.

“MacDonald worked at Providence Health and was a fan of the Toronto Maple Leafs. He had gone to Boston Pizza with friends and family that night to watch a Leafs game.”

He is wanted on a Canada-wide warrant.

MacDonald’s sister, Drema MacDonald, told Global News that she contacted the Bolo Program directly, because she wanted the photo of her brother’s alleged killer shared widely.

She said it has been like “salt in an open wound” knowing that the person responsible for her brother’s death is still free.

“Just the fact that to know that he’s likely still in the GTA,” she said. “I can’t go anywhere without searching for him, (I) pull up in next to a car at a stoplight, and I’m looking around and it’s just such an unsettling feeling.”

“I just want him to pay for what he did,” she continued.

All of the individuals who are in the top 10 of the “most wanted” list are wanted for murder.

Other alleged crimes in the list include attempted murder, accessory after the fact, manslaughter, armed robbery and human trafficking.

These Toronto suspects are also in the top 25, wanted for the following alleged offences according to police:

Images of those listed in the top 25 can be seen below.

More information about each case can be found on the Bolo Program website.

The website says that the top 25 most wanted will be “frequently updated.” 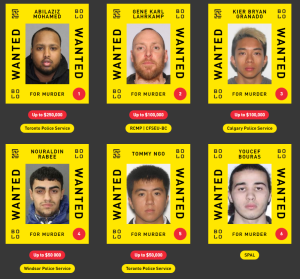 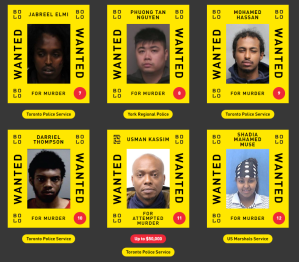 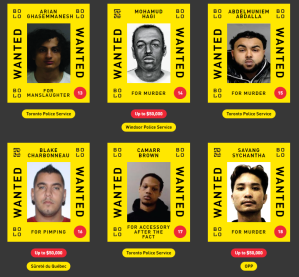 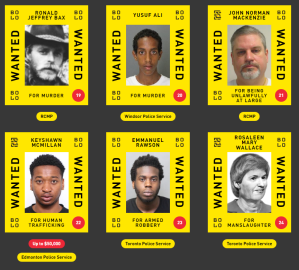 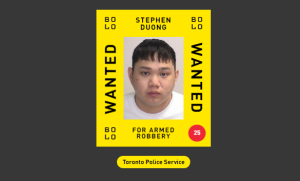