The association, which represents 43,000 Ontario physicians, medical students, retired physician and advocates for changes to health care, previously released its own plan for “fixing the gaps in the health-care system exposed by the COVID-19 pandemic.”

The plan was developed following the “broadest consultation” in the history of the OMA, according to a Thursday news release.

Ontario election 2022: Here’s what the PCs, NDP, Liberals and Greens have promised so far

In the release, the association said it has analyzed each party’s platform ahead of the June 2 election and public policy announcements to see how they line up with OMA priorities, whether there is a clear plan for implementation and whether they are costed.

The association said the report card will continue to be updated throughout the campaign and in the coming years.

“The more stethoscopes a party earns, the more aligned the party’s health-care plans are with the OMA’s plan and the more likely it is that Ontario’s patients will get the care they need, when they need it,” OMA president Dr. Rose Zacharias said in the release.

“We are determined to get our plan adopted and implemented by whoever forms the government.”

The most a party can earn (if they were to be awarded three stethoscopes in each category) is 18.

Currently, the OMA has given both the PCs and Liberals 10 stethoscopes, NDP nine, and Green Party seven. The NDP is the only party to have received three stethoscopes for any category — addressing health-care challenges in northern Ontario. 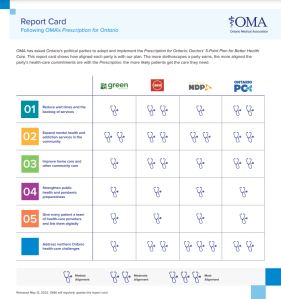 Zacharias said while some commitments have been encouraging, more needs to be done.

“Health care is the No. 1 issue in this election campaign,” OMA CEO Allan O’Dette said.

“The most important lesson we learned during the pandemic is how important it is to have a strong health-care system if you want to have strong and healthy economy.”

A more recent Ipsos poll conducted last month for the association showed that health care is ranked as the most important issue for voters, with one-third saying it’s the number one or two most pressing, the OMA said.

Voters specifically said they were concerned about wait times for health services, which only got worse with the pandemic, and pointed to hiring more health professionals as a solution, the association said.